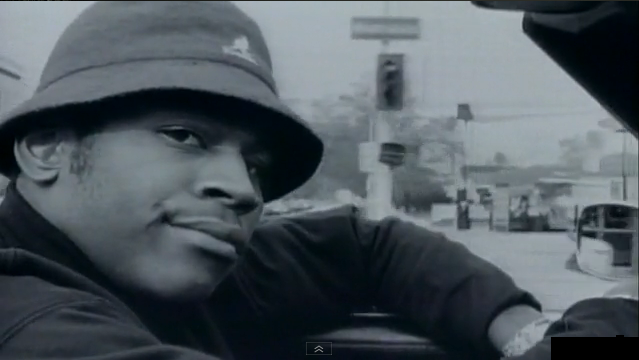 The music video for Going Back to Cali marked a pivotal moment in Ric’s music video directorial career.  Of all the videos, it evoked probably what you would have seen from him if he were able to do a feature film of his own.  He wrote over seven personal feature length screenplays for his directorial debut but none unfortunately ever made it to the screen.

The road to Cali began when Rick Rubin had taken a sudden break from editing the interminable Tougher Than Leather film to do the soundtrack for the film Less Than Zero, which covers the Los Angeles club scene during the late 80s. Rick crafted a soundtrack using some of his own Def Jam artists including Glenn Danzig, Slayer, Public Enemy, Oran “Juice” Jones and LL Cool J along with a variety of other musical acts such as the Bangles, Aerosmith and Roy Orbison.

The LL Cool J song, Going Back to Cali, seemed to reflect in part Rick’s own internal struggles about his own future that would later include a permanent move to California and the establishment of his own record company there.

Since the soundtrack was released on the Def Jam label, he had control of the LL Cool J video.  He immediately went to Ric to begin formulating a music video treatment that he would direct. The Cali video would follow the successful Hazy Shade of Winter song as the second video and third single off the soundtrack.

The concept of alienation and dislocation focused on in the song seemed to spark a collage of films and images in Ric’s mind.  Ric, in the book I Want My MTV, explained clearly the theme of the video: “The theme was alienation and sterility.  It was about hot people looking at each other and not seeing each other.  The girls all like LL, but he rejects them.  ‘I’m so bored’ – that’s the Antonioni influence.  I shot two people up against a wall: LL and Martha Quinn, who I’d been good friends with at NYU.  He looks at her and she looks away; then she looks at him and he doesn’t look at her. Camera pans up the wall.  That’s a quote from an Antonioni movie called The Passenger, except they’re in bed and it’s Jack Nicholson and Maria Schneider.”

Ric worked up his treatment, then assembled, on a series of 5 x 7 index cards, details of the actual shots.  This was his method of actually having each shot on a card to refer to quickly on the set.  Once he had gone through it with Rick Rubin, we then went about discussing how to work it all into a functional format to get it done.

Ric had been to Los Angeles so it wasn’t new to him and was quite clear what he was looking for. He wanted to use the Griffith Observatory as a tribute to the film, Rebel without a Cause and one of his mentors, the late director Nicholas Ray. Ric also mentioned Venice as a backdrop, again as tribute to Orson Welles and Touch of Evil.  The backdrops were his wink back at the films and filmmakers he loved but Welles and Ray did not influence the actual idea and look of the video itself.

Ric explained his vision for that rather clearly, “Going Back to Cali” was supposed to look like a French New Wave film, 1960s art-house cinema, not Truffaut; I hate Truffaut, more Claude Chabrol, Godard, and Antonioni.  Also a little Fellini-I watched 8 ½ and stole two shots from that.  The video was a lot of stern, rigorous imagery, overheated.”

I felt also that it brought him closer to the cool, detached style of Jean Pierre Melville. Though not a direct influence here, it soon becomes a major influence on Ric’s personal writing projects, due to the confidence and experience the video provided him with.

The path to any video shoot was not always an easy one.  There was always a funny sort of tension between Rubin and Menello.  It was almost a replay of Rubin’s favorite Abbott and Costello episodes he watched constantly.  They would be on the same page then boom something would send everything crashing into pieces.  Sometimes it would be funny then other times endlessly annoying. This is best amplified by Rick Rubin’s quote about his presence on the video shoot, “My role on the set was usually supporting Menello-or yelling at Menello, depending on what was going on.”

This came to a head the night before Ric was going to leave for Los Angeles. He called me in a panic to come over to his apartment to check his plane ticket, which had just arrived. Ric believed it was a one-way ticket and Rubin was going to leave him stranded in Los Angeles after the video shoot. I thought it was an absurd notion but I went there anyway incase there was indeed a problem with the ticket.

I checked the ticket and assured Ric everything was fine but he was still uneasy about the trip.  We had gone through his shot breakdowns and he had a very clear idea of what he needed to do and variations for things in case he ran into trouble.

Rick and I had realized long before this that Menello reacted in odd ways to any extreme stress like directing.  This was understandable as many directors, cameramen, and even producers fall victim to an almost fight or flight attack when approaching the live set. But Ric manifested his stress by falling into a state of weird hypochondria and during this period it was bouts of sudden crippling TMJ.  So in order to keep this down, Rick and I agreed never to give Menello any of the negative news or over involve him in any of the day-to-day problems so he could keep his mind clear.

Ric did make his way out to Los Angeles and things moved smoothly from there.  He called me several times to tell me what was going on. LL couldn’t drive a stick shift and the Corvette that they had was a manual.  So on some shots, they had to push the car into frame and have it stuck in first to get some of the classic driving shots. But outside of that, it seemed from my recollection a smooth shoot and edit.

Ric returned to Los Angeles and came over to show me the finished product. I was really surprised with the end result. It turned out even better than what I had anticipated. Ric really did his homework and his vision going into Los Angeles was strong and it showed.  I particularly like how he problem solved the opening shots using the postcards and postcard images. It at once showed the distancing and alienation of being a visitor or tourist in a place you have mixed or unresolved feelings about.

The video was done on a modest budget of $40,000, which was the highest budget we had at the time. The Beastie Boy’s No Sleep Till Brooklyn video cost the same as did Slick Rick’s Children’s Story.  There seems to be much confusion over the Def Jam video budgets.  This really came about because of the agreement Rick Rubin and I had. I was to try and bring the videos in on budget and do the best job possible. Rick would view the final product then based on how well it turned out put a new price tag on it, do a new budget, and  then send that up to the parent company CBS/Columbia. In essence, he was financing the videos then getting reimbursed for them.  So some people reflect those higher numbers when talking about the videos like a $65,000 to $75,000 budget for No Sleep Till Brooklyn because they are viewing the budget that went into the CBS/Columbia for reimbursement and not the actual numbers of what it cost us to make the videos.

The Cali video had an immediate impact on MTV.  Ric was surprised by the amount of adulation he received immediately from it.  Advertising agencies and other artists were calling to see if Ric was interested in working with them but he declined many of them as he usually did.

During this time, a call came in from a lawyer in Los Angeles representing the mother of one of the girls in the video.  “It turned out that one of the girls we signed to dance was underage.  We’d done low-angle shots of them dancing on the phone booths, which looked great, and she was incredible.  She was wearing a mini-skirt, and she’s like, “You can’t see my panties, can you?” And I’m like, “No.”  But actually, I could.  Little polka-dot panties.  Her mother threatened to sue…,” Ric explained in a matter of fact fashion since he didn’t have to deal with the lawyer or mother.

Rick Rubin told me to deal with it, so I talked directly to the mother. I sent her the release form with the phony ID and age on it signed by her daughter.  I told her we would do an edit, fix it and then send her a copy. She seemed OK with that but the problem remained how we were going to fix it. 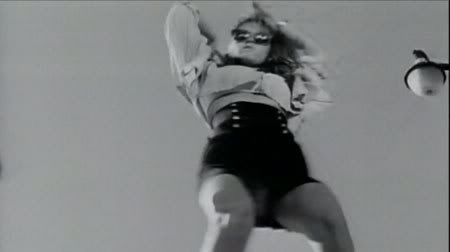 This involved what I called the Def Jam relay.  I had to problem solve with Ric and get him into the edit room.  Ric did not have any extra shots or other takes so the editor tried using a moving black band to cover the opposing shots.  This seemed to work without messing up the video. The next problem was that the video was in heavy rotation on MTV. How were we going to exchange masters without letting them know what happened?  The next part of the relay was to have Rick Rubin step in and take the master to MTV and have them switch it.  We came up with a story that there was a glitch in the master and Menello and LL wanted it fixed. Rick simply had them swap out the masters and we got the new censored version on without a problem.  The mother was happy and there was no interruption of the rotation of the video on MTV.

I think the final product drew from a myriad of tensions that each person was facing: Rick Rubin’s growing ambivalence about leaving New York for Los Angeles, Ric testing himself and trying to bring in all these great filmic influences into a piece that was cohesive and strong along with his frequent battles with Rubin, and extending even to LL Cool J’s feelings about the song and video itself. “This was a strange one. I went out of my comfort zone…and there was a time when I hated ‘Going Back to Cali.’ It ended up being something really special, but it took me a minute, it really did.”

Rick Rubin probably summed the video up best in the end: “It was meant to be like a European art film, almost like a James Bond film, as done by Antonioni.  It shows that good taste can translate to the mainstream. You don’t have to dumb down something good, if you expose it the right way.” 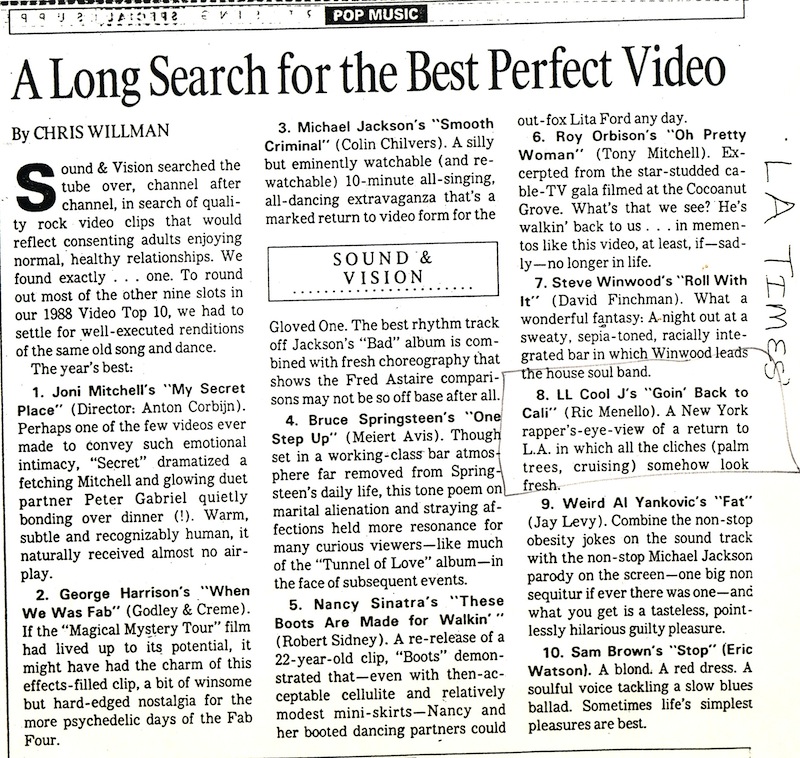 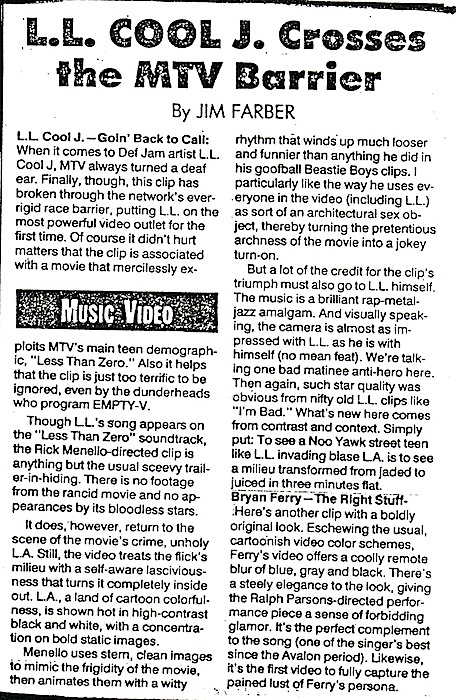 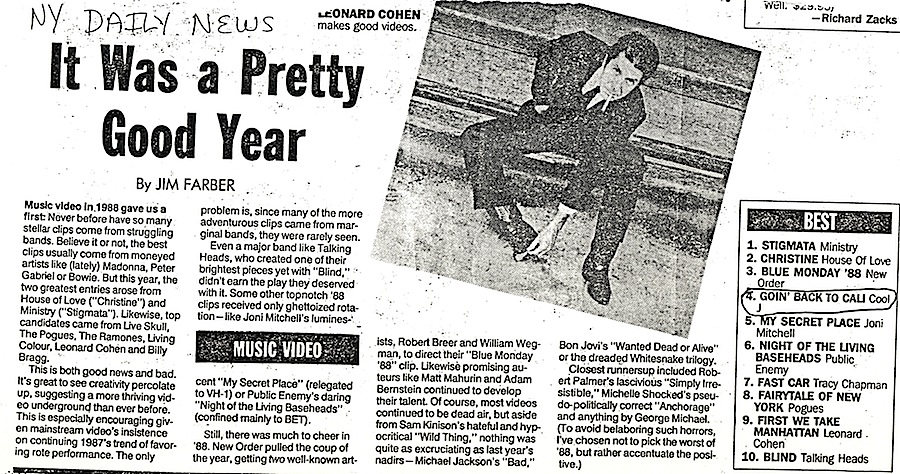 ©2014, Vincent Giordano. Unauthorized use and/or duplication of this material without express and written permission from the author is strictly prohibited.