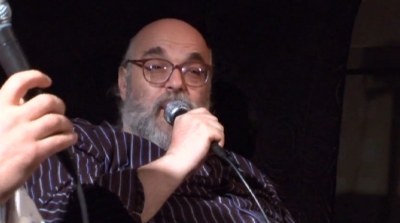 Richard “Ric” Menello was born on August 20, 1952, in Queens, New York, to Rocco Menello, a truck driver and business owner, and Lucille Giordano Menello, a housewife and former art teacher.

Ric grew up and was raised in Brooklyn, New York. His youthful imagination was inspired by Japanese horror films, comic books, and literature. This soon grew into a feverish obsession with film that led him to create his own elaborate 8mm film productions.

Ric earned a bachelor’s degree in Dramatic Literature and Cinema from New York University. He continued to take graduate courses in Cinema Studies at NYU after completing his bachelor’s. He started writing film criticism in college for the NYU Journal and the arts and humor magazine Cold Duck, 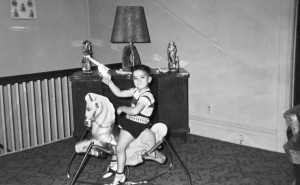 and his articles appeared in Film Comment, Photon, and Blood Times. He later became a regular contributor to European Trash Cinema, where he critiqued Italian and French genre films. One of those early articles, “Dark Universe: The World of Dario Argento” (Photon July 1975), is cited in Maitland McDonagh’s book Broken Mirrors, Broken Minds: The Dark Dreams of Dario Argento.

Wishing to broaden his experiences in the arts, Ric acted onstage in such Off- and Off-Off-Broadway groups as Theater at Riverside Church, the Program in Educational Theater, and the Sammarkind Players. He appeared in productions of Romeo And Juliet, She Stoops to Conquer, Guys And Dolls, The Miracle Worker, Wind in the Willows, and Bell, Book and Candle.

At NYU, he studied acting with and assisted the legendary filmmaker Nicholas Ray, director of Rebel Without a Cause. He continued to act throughout his career in many of his music videos and in the feature films Tougher Than Leather and Drop Dead Rock.

Ric contributed full-length audio commentary, along with critic Dan Yakir, for the DVD release of the late Claude Chabrol’s Pleasure Party (Une Partie de Plaisir), as well as Chabrol’s Cry of the Owl (Le Cri du Hibou) alongside David Kalat. He maintained a long-distance friendship for years with Chabrol, writing to him at length to discuss his many films. Chabrol later gifted Menello with his own personal annotated script for his film L’Enfer (Hell), which he also autographed for Ric in tribute to their long-standing friendship. Menello also spent years researching the life and work of one of his favorite directors, the late Jean Pierre Melville, including corresponding with Pierre Lesou, Philippe Labro, and Bertrand Tavernier, among others. He shared his views on Melville with many fellow writers and cinephiles and received a special thanks in the acknowledgement section of Ginette Vincendeau’s book Jean Pierre Melville: An American in Paris. Japanese culture and cinema, though, remained his lifelong obsession, and his passion and infectious enthusiasm for the many periods of Japanese film remained with him until his final days. His spirited dialogue on Japanese film with friend Patrick Galloway continued to encourage his prodigious viewing and research, and he is thanked by Galloway in his books Warring Clans, Flashing Blades: A Samurai Film Companion and Stray Dogs and Lone Wolves: The Samurai Film Handbook.

During the 1980s, Ric was employed as a part-time desk clerk at the Weinstein Dormitory at New York University while simultaneously attending graduate school. He congregated nightly with the many students discussing film at length with them. Soon they were affectionately calling him “Mr. Ricc,” a name that stuck with him for many years after. A special Mr. Ricc T-shirt was actually designed and sold at one point during the Weinstein days by NYU Student and future writer/director Chris Columbus (Harry Potter, Home Alone, Mrs. Doubtfire).

It was during one of these all-night informal film discussions that Ric met record producer Rick Rubin, the founder of Def Jam Recordings, while Rubin was living in the same dorm. He also first met the Beastie Boys while working at NYU. Writer Dan Charnas, author of The Big Payback: The History of the Business of Hip-Hop, credited Menello with shaping much of Rubin’s musical style and aesthetics, “as all this stuff is starting, Menello helps to form Rick’s aesthetic. Rick knows what he likes, but it takes Menello to help Rick understand it.” 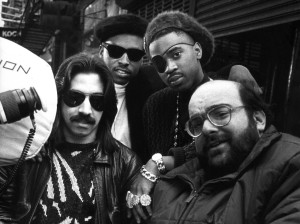 Ric continued writing feature-length screenplays and articles during this time. When Rick formed Def Jam Pictures to produce films and music videos, he hired Ric to work for him, thus beginning their close working relationship.

Rubin chose Ric and his former roommate, Adam Dubin, to co-direct the music video for the Beastie Boys’ 1987 single, “(You Gotta) Fight for Your Right (To Party!).” Ric had already co-written the draft of Tougher Than Leather, which wouldn’t be released until 1988, when Rubin approached him about directing the Beastie Boys’ video. Menello later described himself as hesitant to direct the music video out of concern for “ruining their careers” but accepted the offer. In a 2012 interview with MTV News, he summed up his thoughts on the music video more than a quarter century later saying, “It was kind of a dumb video, but it was done in a very sophisticated way visually. I often say the style of the video is ‘stupidity done in an intelligent way’… If I knew that people were going to be looking at them 26 years later, I would’ve done better!… I wrote the movie Tougher Than Leather, which the Beastie Boys appeared in, then Rick Rubin suggested I would be a good director for ‘Fight for Your Right’ because I had new ideas and it was better to fail at a new idea than to succeed with a crappy old idea.” The landmark music video mixed Menello’s highbrow and lowbrow humor. Menello, a cinephile, added references to numerous films to the music video, including Breakfast at Tiffany’s and Dawn of the Dead. Menello’s video effectively launched the Beastie Boys’ mainstream hip-hop careers. Rob Tannenbaum, the author of the 2011 book, I Want My MTV: The Uncensored Story of the Music Video Revolution, noted that “There are no more than a handful of music videos that have done more for a band’s career and more vividly described their image than ‘Fight For Your Right To Party’, did for the Beastie Boys.”

Ric continued his association with the Beastie Boys by writing a television pilot for The Beastie Boys Get Stupid, which he co-created, with Rubin. Menello and Dubin co-directed the Beastie Boys’ music video “No Sleep till Brooklyn” in 1987. He then wrote the screenplay for the feature-length film Scared Stupid, 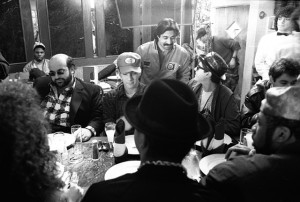 Ric went on to make several other music videos as a solo director, including such highly distinct and hugely successful videos as LL Cool J’s “Going Back to Cali,” Danzig’s “Mother,” and Slick Rick’s “Children’s Story.” He also directed videos for artists as diverse as MC Lyte and Marcia Griffiths.

The recipient of two RIAA certified Gold Video Awards, and a two-time Billboard Music Video Awards nominee, he was honored with a screening of Going Back to Cali at a special program of influential early videos at the Los Angles Film Festival. In addition, several independent features and short films that he co-wrote have been screened at Slamdance, South by Southwest, the Atlanta Film Festival, and the Just for Laughs Comedy Festival in Montreal.

Ric continued to work behind the scenes, writing and co-writing treatments for an endless stream of music videos. In 1993, he collaborated with his cousin and frequent collaborator Vincent Giordano on the treatments for Doro Pesch’s “Bad Blood” and “Last Day of My Life,” which Giordano both directed and shot. The “Bad Blood” video was originally influenced by Sam Fuller’s film Verboten!, and their treatment further developed into a powerful, thought-provoking clip that was voted the Best Anti-Racism Video during the first MTV Europe Music Awards ceremony in 1994. The video later spawned a series of commercials and public service announcements by Doro calling for racial tolerance in Germany. Giordano and Menello continued working on music videos with one of their last music video collaborations being the low-budget video for “Kittie’s Funeral For Yesterday,” which Giordano directed and for which Ric co-wrote the treatment.

Ric also worked as a screenwriter throughout the 1980s, 1990s, 2000s, and 2010s. He often wrote at night at the Vox Pop cafe in the Flatbush neighborhood of Brooklyn. He moved to another Brooklyn bar, Sycamore, when Vox Pop closed in 2011. He also hosted weekly film screenings with guests that included Mark Romanek and Darren Aronofsky. Menello also collaborated with a diverse assortment of actors, writers, and directors, including his friend actor/writer Owen Wilson as a creative consultant to revise and strengthen existing dialogue on such films as The Wedding Crashers, Big Bounce, and Starsky and Hutch. He additionally was a creative associate to Larry Charles on the HBO pilot Burt and Dickie, which was based on an earlier short film written by Ric and director Adam Dubin.

Menello and film director James Gray teamed up to co-write the 2008 romantic drama Two Lovers starring Gwyneth Paltrow and Joaquin Phoenix. Menello also co-wrote Gray’s upcoming film The Immigrant, which starred Joaquin Phoenix, Marion Cotillard, and Jeremy Renner and was screened at the Cannes Film Festival and New York Film Festival prior to its May 2014 release. Prior to that, he was a consultant to the filmmakers on Gray’s earlier feature We Own the Night.

He completed several screenplays just before his death, including Make the Wiseguys Weep, which he adapted from the book by David Evanier on the life of Jimmy Roselli. His other screenplays, including Pair Of Lies, are currently seeking financing.

Ric enjoyed collaborating with a wide assortment of writers and directors, and his huge body of written work demonstrated a steady output, which accelerated over the last few years of his life. 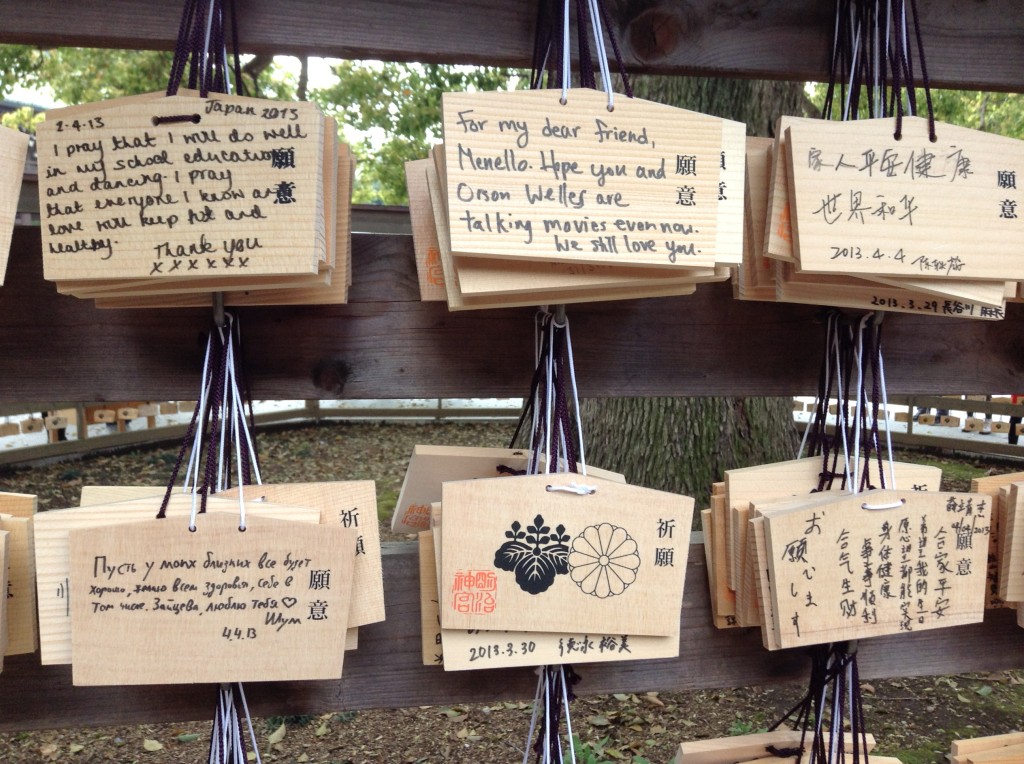 An unfortunate series of articles from writer Richard Brody appeared in the New Yorker right after his death. Both articles were poorly researched and based mostly on conjecture. They were furiously rebutted by working associates, friends, and family. The articles amounted to nothing more than a ruthless, unmotivated character assassination. Brody surreptitiously rewrote the articles and eliminated the negative feedback that appeared beneath each piece, further showing his calculated vindictiveness.

A mosaic designed by artist Juan Carlos Pinto at the Newkirk Plaza Tunnel in Brooklyn was dedicated to Ric on May 11th, 2013.