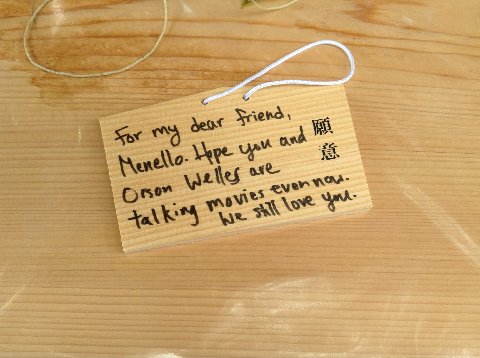 Picture this. You’re a Japanese film major fresh out of college and, on a whim, you’re heading through Midtown to attend a small reception in honor of an aged—but still great—Japanese film star. The impeccable, the unbearable Tatsuya Nakadai is being honored and you’ve decided to go. With your mom. Because, after all, it’s a once in a lifetime opportunity.

Now imagine that you’re punctual, unlike everyone else in this city. Imagine that you’re in a fancy reception room—with your mom and the impeccable, unbearable Tatsuya Nakadai, and a few strangers who have the presence of mind, the strength of spirit, to know how to look like they belong. You certainly don’t have that. You stick to the wall. And you don’t make eye contact with anybody.

But somehow, Ric Menello finds you anyway. Sauntering into the scene in a t-shirt and sweatpants and, despite the need for a costume change, with legitimate samurai swagger. And in five seconds, possibly less, it was like we’d known him forever.

Accidental meetings are one in a million even when you’re dealing with people for whom socialization and leaving the house is a regular, expected part of daily life. Now think about how rare it is for the anti-social—which, no offense mom, we are—to achieve the same lucky feat. The fact that we were even there is incredible enough, but honestly we owe most of the incredible stuff to Menello, because he was our samurai in shining sweatpants that afternoon.

Like that old saying—take a picture, it lasts longer.

That picture’s been the desktop wallpaper on our computer ever since. Five years ago, about twenty different haircuts and colors back, I’ve still got Japanese cinematic royalty standing by my side with his arm around me—while I think I might’ve been wondering if I should put my hand on the small of his back or, like my new friend Menello would have encouraged me to do, just go straight for the butt.

There’s this moment in Yojimbo—the moment when you fall in love with Yojimbo. He’s got this roll of his shoulders, this pop of his neck. If you’ve seen the movie, then you know what I’m talking about. You get to watch it, center frame, but only from behind: as he scratches his hairline, bitten by unseen lice and fleas, plagued by sore muscles, sleeping on the road, and the regular trials and tribulations of traditional Japanese
furniture.

That’s when you fall in love with Yojimbo. After he’s come in, directed a play in your town, killed off a whole cast of characters, moved all the pieces around, redecorated, changed your world, made you laugh, made you uncomfortable, made you pay attention, and—roll credits. Yojimbo has left the village.

To thank Menello for all the pictures, I’ll end with a poem I wrote a long time ago, before I even knew him, about another member of the royal family of Japanese cinema. I didn’t realize back then that the poem was actually about Menello and not Toshiro Mifune in
Yojimbo, but to be honest… They were kind of the same person.

In nineteen sixty one, the samurai
is driving a brand new rolls royce
out of the lot.

You can tell he’s a ronin
because he’s let his hair grow out
and the dust is beginning to settle
on his broad shoulders.

This is the great era
of Japanese film, and the great era
of collaboration with Kurosawa:
in five years, Mifune’s swagger
will be just as extinct as the samurai
in eighteen sixty eight,
as new alliances restore the emperor
and outlaw the katana.

But even
in the foreign convertible, even
without a lord to serve, the samurai
has an unmistakable severity
and holds himself immortal
above the fresh upholstery
and the steering wheel,
the wind disturbing
only his topknot.

One thought on “Rikyu by Hannah Jones”